CSTEP is carrying out a research project that examines dynamic changes taking place in peri-urban areas in India. The two geographical areas include, Doddaballapur and Sriperambudur, which lie outside of the cities of Bangalore and Chennai respectively. Such peri-urban areas are transition zones between urbanised pockets and agricultural hinterland.  Changes in these zones are triggered by various conditions depending on the social, economic and political context. In addition, global environmental changes including climate change are also transforming these areas.

The research project is adopting a number of approaches/methods that can help gain an understanding of Doddaballapur. For example, the Geographical Information System (GIS) is used to learn about land use changes over time, analysing census data to learn about socioeconomic changes, carrying out household surveys to learn about water, sanitation, multidimensional poverty, women and their empowerment. These data and tools are being complemented by participatory appraisal methods such as focus group discussions in a couple of gram panchayats. Since climate variability and change will mainly affect temperature and rainfall, governance in this peri-urban area with regard to water and land are also being studied by CSTEP. 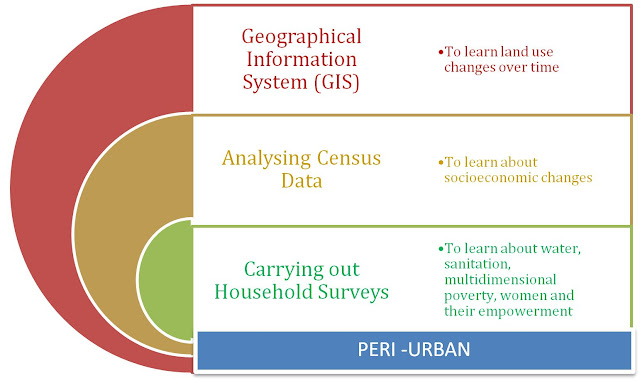 After completing these analyses, we will carry out an exercise called participatory scenario development. In such a forum, some members of the community, decision makers, local leaders and experts will consider the research findings, place them in the context of the kind of future the community seeks, their challenges, and then back cast to decide what they should be doing today and in the near term to reach their goals. For instance, what kinds of policies would be needed to ensure that everyone has access to drinking water? What kinds of actions are needed? At the end of this research, we hope to gain a layered understanding, through the several different kinds of approaches we have taken, of different aspects of this taluk located outside of Bangalore. Furthermore, we hope that these findings could be used by local policy makers to better understand the problems and challenges of people living there.