Think Tank researchers sometimes complain that policy-makers do not engage with their research when they publish it. They argue that ‘demand’ for evidence from policy-makers must to be stimulated. They despair that policy-makers ignore their evidence and instead make ‘political’ decisions. And when you ask them what the most important aspect of their work is, they say it is to strive for an ever high standard of research quality.

My view is that research will only change policy if it is relevant to the challenges that policy-makers are grappling with. The ‘supply’ of research needs to be underpinned by policy engagement, in the same way that market-testing underpins successful sales. I think that every decision a policy-maker takes is ultimately a political choice and that research without realistic recommendations is best left to academia. Research quality is a hygiene factor for Think Tanks: you would not eat at a dirty restaurant just as you would not be influenced by poor quality research. But research quality, while being a necessary pre-requisite, is not enough to make your research influential.

I have spent the last decade in a UK Think Tank which now has a twenty five year track record of influencing policy but even there, we still needed to remind our researchers (and socialise our new recruits). We discussed it, we reflected on it and we produced this handy guide: 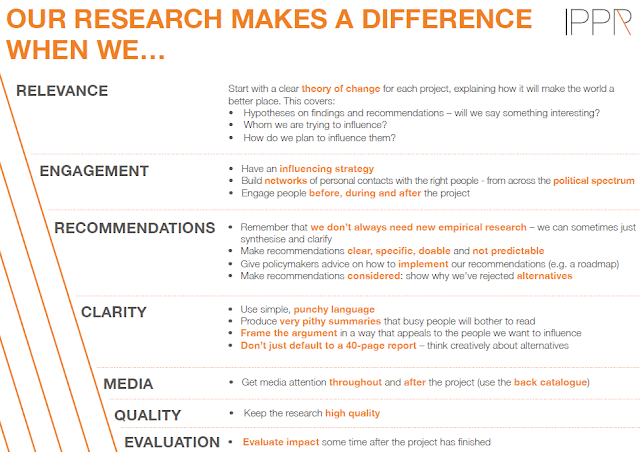 Making research relevant, is key to the ultimate influence that you can have on policy Before even embarking on a research project, ask your researchers to consider the relevance of their work. Ask them to identify who the key actors in the policy area are (and therefore the key audience for their recommendations).

Engagement is a two-way process. Engagement is not like pouring water from a cup to a jug. Engagement is a conversation where researchers can gain empathy from policy-makers about the constraints they are operating in, about the timescales they are working towards and, ultimately, what they are ‘in the market’ for. Engagement needs to start right at the beginning of a project and should not end until long after research is published. If your goal is policy change, then your research report is just one tool to be used in the pursuit of that goal. For example,  at CRES were able to reform tobacco taxation, not just in Senegal but across West Africa, because they engaged policy makers with their ongoing research.

Research quality must be upheld: your credibility depends on it. But just as important is the stress-testing of recommendations. Can researchers defend their recommendations? Can they explain the validity of their methodology? Does their ‘pitch’ for policy change stand up to scrutiny, break-through scepticism and ultimately, engage with the politics of the possible?

The politics of possible is the intersection between three things: a problem, a policy and a capable political actor. Research needs to clearly identify and build a consensus around an agreed problem. But research also needs to propose, validate and advocate for a policy solution. Finally, a policy actor must be able to act, and that usually cannot happen unless politics aligns. A perfect solution to a widely acknowledged problem may have political barriers at one time but not at another. This is known as a ‘policy window’ and it is central to leveraging the politics of the possible.

Finally, are you communicating with clarity? Have you framed the argument and refined your message to influence the right change-makers? And are you making both a rational and an emotional case for change? The strongest cases for change include both a rational and emotional proposition. While a policy maker may justify the change they have made based on your rational evidence, their actions may only be inspired when you appeal to both their head and their heart.