During the last three decades, The Salvadoran Foundation for Economic and Social Development, Fusades, has grown to become one of the most influential development organisations in El Salvador, and is also a well-respected institution dedicated to public policy internationally. Its unique model as both a Think Tank and programme development center has brought very gratifying achievements, but also its share of challenges, especially when it comes to communication and incidence.

The solid growth during its 32 years of existence, transformed a single department NGO in 1983 into an 8 department Think Tank in 2015, with expertise in areas of development such as economics, politics, legal and institutional issues, social issues, entrepreneurship, local development, quality assurance, and others.

The quality of the work and influence from each department over time inescapably strengthened each one in its own right, therefore becoming more and more independent. And in communications, this is not necessarily a good thing. Position and policy papers, as well as other in-depth studies were presented in different forms, names, frequencies and looks, with much liberty to each department. This positive reputation developed individually gave way to isolated and independent communications efforts, making institutional control over the impact and incidence harder every year.

In order to not become a victim of its own growth, a long-term communication strategy began in Fusades since 2009, which included refreshing the organisation’s brand and image as well as a plan to bring regularity and customisation to all the Foundation’s publications. So slowly but surely, a new genre of documents were published in 2014, designed for specific needs and audiences. Another key part of this evolution was the integration of an institutional data base of stakeholders, identified and separated according to issue, relevance, area of society, possible cooperation and other specifications. Previously, the origin of each paper was more associated to each department; now, all publications come from Fusades. 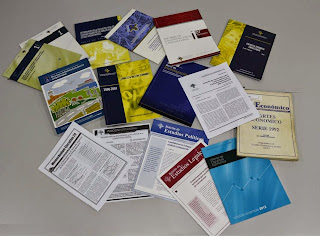 We now have graphic uniformity and strategic outreach to key stakeholders and decision makers, and we are able to keep track of hits and misses in order to rethink strategies and tactics, making every communications effort more effective. Another important part of these changes has been to optimise the content in our publications for the social media. New technologies play a major role in Fusades’ communication and influence actions, principally to respond to the needs of local or international media, Salvadorans living abroad, younger audiences, foreign organisations and direct communication with anyone who wishes more information on a topic or just has an opinion about our proposals. We are currently producing short videos, animations and infographics to promote our ideas and recommendations, or to stir a debate around certain issues.

The long term Communications Plan includes regular media training and social media skills courses and updates for its researchers. These are very important skills to develop by specialists who are our organisation’s spokespersons, individually in his or her area of expertise. Fusades has transformed its communications source from a perception of various independent departments, to one defined institutional origin, so we can strategically inject all of the Foundation’s reputation, credibility and influence into each and every public policy proposal.

Change in an organisation such as Fusades does not come easily. Much attention was paid to the embedded culture and the human factor. Patience, perseverance and support from the Board has been critical and necessary to the success of these decisions, but also a new vision of influence in public policy tied to refreshed Monitoring and Evaluation efforts, as well as the definition of long term objectives also played a very important role.